We gathered at Steve's this week and had a great turnout of players. 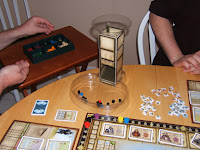 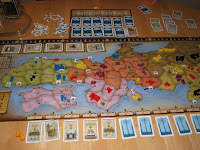 I brought this one and was anxious to play it since I had been anticipating getting it since Christmas. This was everyone's first playing and after spending about 60min explaining the rules in detail we were ready to begin.

The game is an interesting mix of war-game and Econimic game with various tactical decisions along the way. These decisions become more interesting since you usually have only partial information and you are limited to 10 actions and each one can only be performed once (there is an attack A and attack B option) and each action can only be done in a single territory. Money is tight and anticipating your opponent's actions is critical to success. Combat is quick and is decided by a cube tower instead of rolling dice. Everyone seemed to enjoy the game even though it took us about 3 hrs to complete the game. I'll give a more thorough review at a later time.

Joel was able to defend his edge of the board effectively and build Temples and Castles in his regions to claim the prestigious title of Shogun. Scores: Joel 48, Steve 42, Matt 40, Michael 39, Adam 32.

Settlers of Catan - Cities and Knights 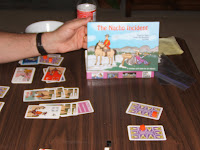 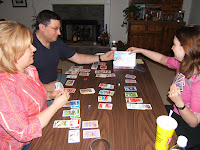 We gathered at Steve's with a small group since it was Spring Break week here in Atlanta. 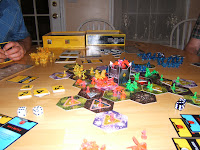 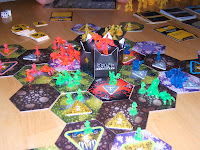 We got out Nexus Ops and started battling for control of the Moon. This is a light war game that encourages attacking and avoids the "turtle" strategy that is common in many war games. Victory Points are only earned when you attack and win a battle. The units are colorful (a bit neon) and flavorful of outer-space creatures. Each turn players purchase units (similar to Axis and Allies), place them on the board, and attack their opponents in order to claim victory points and capture mining spaces that earn additional income. There is also a Monolith in the center of the board that can be controlled by a player earning that player 2 energize cards that give various special abilities. Energize cards are also earned when you lose a battle if you are attacked so that the loser of battles gets some small reward. The game is fun and gets into the action quickly after a little bit of exploration. It plays in about 120 min or so once you understand the rules.

Joel and I fought each other most of this game while Steve and Andy did the same across the board from us. I tried a brief invasion of Andy's territory but was squashed by his Rubium Dragons. Andy took control of the Monolith from Joel and played some big victory point cards to pull out the victory! Final Scores: Andy 12, Michael 9, Joel 8, Steve 6.

Pirate's Cove
Argh! This is definitely a well-themed boardgame. You get to move to various Islands, build up your boat (Hull, Guns, Crew, and Sails), find treasure, bury treasure on Treasure Island, and visit the Tavern to drink and brag about all your Pirate adventures. Of course you have to avoid the other Pirates and the Black Pirate too or else you may have to fight them and try to damage their vessel before they sink your ship! This was my first time playing Pirate's Cove and it was a lot of fun (even though it has a lot of luck). Andy was the best Pirate as he sank the Royal Navy in one volley from his Six Gun Salute!

We had a small group over to our house on Tuesday.

This is a light "push your luck" dice game that Warren and Sharon let us borrow to play with the kids. They enjoy it and we got a game in with Heather, Matthew, Barbara, Matt, Andrew, and me. Andrew proved the winner and everyone was in the game except for me (I was always within 1 or 2 spaces from the Start...game ends at space 21.

We decided to try one of the El Grande Expansions and it was an interesting variation. The Grand Inquisitor is a single card in Stack 6 (similar to the King) and it allows a player to control the black caballeros tokens on the board. The expansion also adds a 7th stack that places new goods (Gold and Wares) on two new boards (America and the Mediterranean). There is also a board for France and a board for the Ship to travel from Spain to the colonies (America and Med).

The game allows for some interesting manuevering to get goods back to Spain for VPs and also getting certain positions on boards that are worth additional VPs during scoring. This increases the benefits of Intrigue actions and also makes for a greater spread of Caballeros tokens across the board. In general, I liked the expansion once we got through the added rules and resolved some unanswered questions with House Rules.

What is this Blog about?

This Blog is a place for me to document game sessions and events as well as boardgaming thoughts. I will also use it to occasionally update with family events and activities.